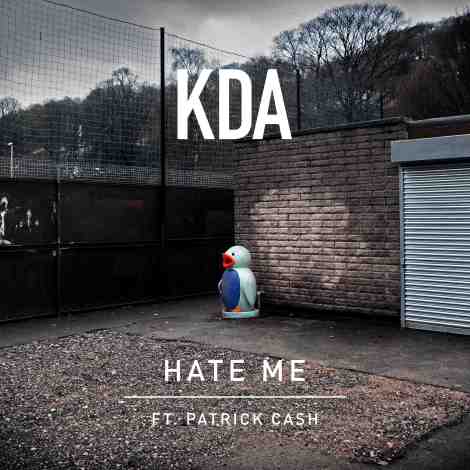 KDA’s new single is ‘Hate Me’ feat. poet/playwright Patrick Cash. It’s out today on The 35 Records/BMG. (The 35 Records is KDA’s new label)
KDA’s ‘Hate Me’ (featuring playwright and poet Patrick Cash) is the freshest sounding British house music record for years. First given to a select handful of DJs, including Jackmaster, Seth Troxler, Jamie Jones, Tiga and Pete Tong (Essential New Tune on Radio 1), ‘Hate Me’ has dominated their sets since IMS. Originally slated as the first single on KDA’s new label ‘The 35 Records’, ‘Hate Me’ has been picked up by BMG and will be available as a collaborative label release from 8 December (impact mid-Feb).

Whilst ‘Hate Me’s pulsing bassline immediately commands any dancefloor; the lyrics here provide a lot more food for thought than your usual club banger. Though echoing the spoken-word house records of old, in contrast ‘Hate Me’s’ lyrics(below) are delivered in Cash’s British accent.

‘Hate Me’ lyrics
I’ve been thinking a lot lately about hating,
what eats at the heart of hate.
Because you know I hate people every day.
I hate tourists on Oxford Street,
I hate children on the tube.
And I hate slow walkers stopping me getting to my train.
I wanna grab their faces, say with all that rages,
get out of my fucking way.
But i don’t, because I know my hatred is a ghost.
It’s a quick-flicked switch,
a brief-lit wick.
It’s a fake shade of hate,
just a frustration of place.
I mean don’t get me wrong I’m not a saint,
i dislike a fair few people.
But that’s not the same as hating.
That’s not the same as wanting to stamp on their faces.
Haters always gonna hate they say.
And in some places if you ain’t got hatred you ain’t got status.
So let’s play with the face of hate.
Hate me for a moment.
Hate everything i am.
Hate me because I am different to you.
Hate my words and my brothers too.
Hate me for my body,
that ends at my fingertips.
Hate my skin, my pigmentation,
hate me for the sensations I share with another in bed.
Hate me for my private moments.
Hate the tears I’ve shed and the hopes I’ve shared.
Hate my thoughts and fears and dreams,
hate the man I might yet be.
Then take your hate away, and make it something great.
Nurture your hatred.
Feed it and mould it like clay.
Stoke at its embers until its coals glow red.
Sculpt it like glass being blown,
till it fits the shape of your soul.
And hate will heat you in the cold,
hate will be there when you’re alone.
(When you’re alone)
And at this point, I would speak of the crimes of hate.
Of screaming ugly at a woman in a magazine.
Of a woman in Iran stoned because she was raped.
And yes this poem is about hate crime,
but it’s also about why.
It’s about Cameroon, Uganda and Russia.
It’s about a neighbour hating another.
Men deciding on abortion rights and
Europe losing the right wing fight,
the right wing fight.
It’s about LGBT
It’s about immigrants.
It’s about antisemitism in Hungary,
and Pegida rising in Germany.
It’s about Orlando.
It’s about invading mosques.
It’s about a jungle in Calais and a black boy shot in the streets in the USA.
It’s looking at a human race, that sometimes seems consumed, and wasted, by hatred,
and standing up to that and saying, I am not afraid.
By Patrick Cash