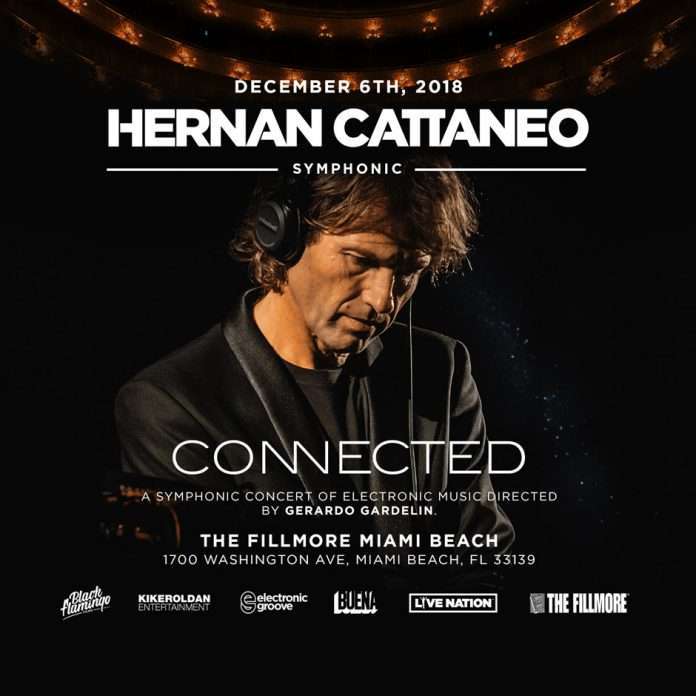 After six acclaimed shows in his native country Argentina, internationally-renowned DJ and producer Hernan Cattaneo brings ‘Connected’, his one-of-a-kind musical journey, to the United States on December 6th, 2018. The historic Fillmore Miami Beach auditorium will be the setting for a truly unique experience, where Cattaneo is joined on stage by his Soundexile partners Oliverio Sofia and Baunder, to perform symphonic versions of a carefully curated selection of songs spanning the past three decades of electronic music, as well as some of his own Soundexile productions.

Hernan Cattaneo is an international superstar thanks to his mastery of sound and his instinct for setting the mood, regularly bringing in the crowds since his early days in Buenos Aires, ever growing and evolving as an artist and earning the privileged spot he´s in amongst the world´s top DJs. With ‘Connected’, he´s taken on a project that allows him to express his artistic vision in a different way, by creating a unique blend of electronic and classical music that honors the songs and artists he’s been inspired by while displaying them in a symphonic light. With the support of his fellow Soundexile partners Oliverio Sofia and Baunder, guest artist Nick Warren and the glorious addition of The Miami Symphony Orchestra (MISO) which will be under the orchestral direction of maestro Gerardo Gardelin, Cattaneo brings his vision to life and turns classics like The Orb´s ‘Little Fluffy Clouds’, Massive Attack´s ‘Unfinished Sympathy’ and Depeche Mode´s ‘Enjoy the Silence’ into exciting new musical experiences, where electronic music meets the timeless sounds of classical instruments. And, as a special treat, the show will also feature an appearance by Joe Smooth performing his classic house track ‘Promised Land’.

The Fillmore Miami Beach will be the selected venue to host this very special event, a city landmark that has played a key role in keeping Miami Beach well connected with show business and the performing arts since the 1950’s, being the stage, throughout its history, for hit TV shows, musical performances from a myriad of top-level artists and various successful Broadway productions. A multi-million-dollar renovation in 2007 kept the Fillmore up to date and is today operated by Live Nation, with a schedule filled with the biggest names in entertainment. The state-of-the-art light and sound systems along with the auditorium’s acoustics will be the perfect combination to truly appreciate and get lost in the musical journey that ‘Connected’ is meant to be, a rare occurrence in itself made even more special by its setting.

By taking place on December 6th, during Miami’s Art Basel Week, the show will become a part of its exclusive musical offering, fitting in nicely with the art festival´s spirit. An event that has grown exponentially in popularity with time, the Art Basel is one of Miami´s main cultural yearly events, attracting artists and audiences from around the world and turning the city into an epicenter for the arts and culture for a week. Hernan Cattaneo’s concept behind ‘Connected’ is sure to appeal to a large number of festival-goers for many reasons, beginning with his own reputation as a world-class DJ and producer as well as for the show´s intriguing premise. The care and attention to detail put into every one of the songs played in ‘Connected’, added to the acoustics of a classic venue like the Fillmore amid Art Basel´s festival atmosphere are all elements that will surely come together perfectly to deliver an unforgettable experience.

This will be the first event of a series of live concerts and shows targeted to the dance music fan, produced by Black Flamingo Films in partnership with Kike Roldan Entertainment and Electronic Groove. Attendees will experience unique presentations by some of the most important and forward-thinking artists around the globe, showcasing extreme attention to detail while delivering quality sound in top selected venues.

Tickets will start selling on September 14th at LiveNation.com

For more information on The Fillmore Miami Beach visit:
http://fillmoremb.com