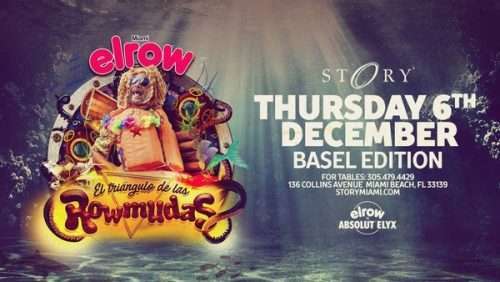 After a sold-out show during Miami Music Week 2018, elrow makes its long-awaited Art Basel debut on Thursday, December 6 at Story Nightclub, with The Rowmuda Triangle, ‘The Party of Eternal Happiness’ theme
11PM – 5AM //Get Tickets Here

Inspired by the mysteries behind the Bermuda Triangle, the immersive Rowmuda Triangle party celebrates an odyssey that began aboard a pirate ship from Ibiza and went off course near Atlantis. Swallowed whole by a mysterious sea creature called the Craken, the surreal party continued in the belly of the beast and ultimately became known as “The Party of Eternal Happiness”. Bringing a taste of Ibiza to Miami for Art Basel, this wild fiesta is full of shipwrecks, sunken airplanes, insane sea creatures, and hippy communes under the sea. Story’s 17,000 square foot size makes it the perfect venue for a larger-than-life event like The Rowmuda Triangle. Elrow’s musical line up, which features the world’s most trending house music artists, will be announced next week.

Launched in Barcelona in 2010, elrow is the modern iteration of an entertainment family dynasty that stretches back almost 150 years. Currently at the helm of the multimedia conglomerate are Juan Arnau Lasierra (CEO) and Cruz Arnau Lasierra (Marketing Director), who consider “spectacle, music, color and happiness” an inherent part of elrow’s DNA. Their fantasy-driven philosophy re-imagines world traditions and cultures throughout the ages, transforming them into otherworldly experiences. In 2018 the Arnaus—dubbed “the Medicis of raving” by The Guardian—proved once again that they are without comparison when it comes to staging larger-than-life, immersive experiences that push the boundaries of nightclubbing.