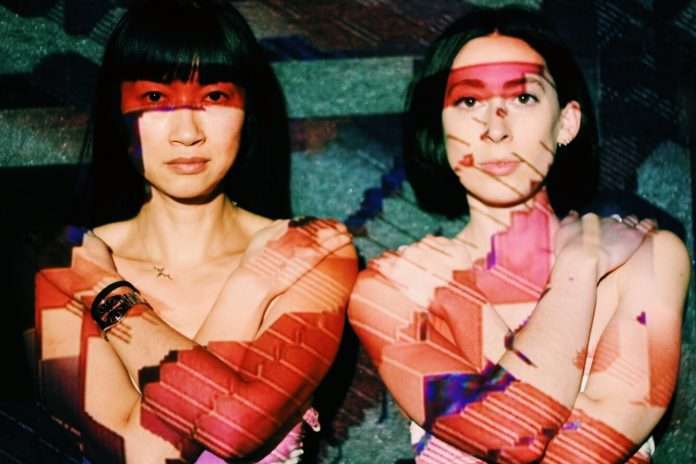 Producer and DJ Mimi Xu and classically trained multi-instrumentalist MAGUIRE will release their debut album as Awkward Moments in March 2020.

The conceptual AV project was born in 2017, and was heavily inspired by Expanded Cinema – an approach to multimedia performances that rejects the traditional one-way relationship between the audience and screen.

With sound at its core, Awkward Moments is conceived as a performance art series that uses mixed media to explore the emotional, philosophical and metaphysical implications of a biological lifecycle and its eternal recurrence.

The duo’s debut release was recorded over the course of six months in early 2018, in the lead up to their gig at Houghton Festival . “Kind of an unorthodox sequence of events, but we like to work with a venue or event in mind when writing to provide initial inspiration, as it is very much an audio visual project dependant on space and setting,” Awkward Moments say.

Dubbed An Entropic Cycle, the six-track release sees Mimi Xu layer electronic beats and synths over the organic sounds of MAGUIRE’s viola and piano. The result is a 40 minute sonic journey through ambient, experimental and electronica that sees the duo experiment with rich textures and deep atmospheres, angelic chords and pulsating beats — organic and digital sounds oscillating together in unison.

“Series V ‘An Entropic Cycle’ deals with the intangible nature of reality,” the duo explains. “It ebbs and flows between order and disorder, form and formlessness; constantly shape shifting to emulate the dizzying experience of being alive within an eternally recurring cycle of birth, life, death and rebirth. In the words of Virginia Woolf ‘I see myself as a fish in a stream; deflected; held in place; but cannot describe the stream.’ This is our attempt to recreate that stream of existence through music and visuals.”

Tracklist:
Particles In Motion
A Blooming Attraction
Heart Of The Maze
Fly Away Together
La Mort De La Phalène
Return To Matter

Denis Sulta announces ‘In~Narito’ & ‘It’s Tough, But Not As Much...